After spending some of his early years in Pennsylvania, Drew Powell’s family moved to Bethesda in 1963.  Since then he’s spent most of his life in or near Rockville.

As he puts it, “I was one of the few not-rich-kids to live in Bethesda and graduate from Walt Whitman high school.”  After majoring in chemistry at Syracuse University, Powell came back to Montgomery County and worked for Digital Communications Corporation (now Hughes Network Systems).

With an entrepreneurial spirit, he started his own business in 1990 in sales and marketing in the telecommunications industry.  Working with U.S. multinationals, his firm specializes in serving the countries in Eastern Europe and the former Soviet Republics.  After the war ended in Bosnia, Powell’s firm helped the Bosnian government to set up the first nationally offered Internet service and along with major telecommunications infrastructure in that country.

He has served as the Executive Director of this all-volunteer, citizens’ watchdog group for more than four years.  He worked tirelessly in support of citizen issues regarding accountability and transparency at the county and municipal levels of local government.  To this end, Powell testified on numerous occasions before the Mayor and City Council as well as the County Council. 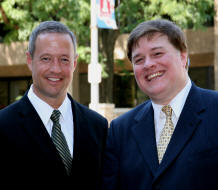 He has worked closely with elected officials at the municipal, county and state levels. As Executive Director of NeighborsPAC, Powell played a significant role in helping define the issues of over-development, land-use and the potential of undue influence in the form of campaign finance in Montgomery County’s 2006 election.  According to County Executive, Ike Leggett in the February 11, 2007 Washington Post, “[Powell and NeighborsPAC] made it easier for the average citizen to understand.  That helped create the atmosphere that I think led voters to make the decisions they made.”

Powell has served as a director of the board or other positions with regional civic organizations and is currently involved in Rockville’s Woodley Gardens Civic Association, where he and his wife, Dew, a social worker, and their two sons, Ethan and Tyler, currently reside.

When asked why is running for Mayor of Rockville, Powell said, “Rockville is at a crossroads, like the county in 2006.  We have to decide if we want to manage growth, preserving Rockville’s hometown character or become too urbanized and lose our sense of a city of neighborhoods.”

Powell continued, “Rockville must retain its hometown feel by remaining a city that promotes playgrounds for children and not become a playground for the development industry.”

“As mayor, I’ll hold the line on spending, while maintaining Rockville’s nationally recognized citizen services.  This will increase the quality of life for all of Rockville’s citizens.  It’s time City government put citizen interests first.”